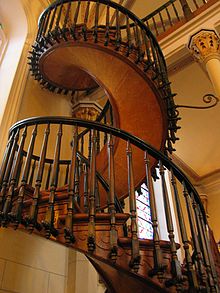 The history of the Loretto Chapel began when Bishop Jean Baptisite Lamy was appointed by the Church to the New Mexico Territory in1850. As part of his mission to build churches and educational facilities, Lamy asked the Sisters of Loretto (a teaching order) to leave their home in Kentucky and establish a school for girls in the frontier city of Santa Fe.

The Sisters arrived in Santa Fe in 1852 and opened the Academy of Our Lady of Light (Loretto) in 1853. Despite the challenges of the territory (smallpox, tuberculosis, leaky mud roofs and even a brush with the rowdy Confederate Texans during the Civil War), the boarding and day school expanded and flourished.

It was decided that the school needed a chapel. Property was purchased and in 1873 work began on the Loretto Chapel.

Undoubtedly influenced by the French clergy in Santa Fe, the Gothic Revival-style chapel was patterned after King Louis IX’s Sainte-Chapelle in Paris; a striking contrast to the adobe churches already in the area.

Stone for the Chapel was quarried from locations around Santa Fe including Cerro Colorado, about 20 miles from Santa Fe near the town of Lamy. The sandstone for the walls and the porous volcanic stone used for the ceiling were hauled to town by wagon.

The ornate stained glass in the Loretto Chapel also made part of its journey to Santa Fe via wagon. Purchased in 1876 from the DuBois Studio in Paris, the glass was first sent from Paris to New Orleans by sailing ship and then by paddle boat to St. Louis, MO. where it was taken by covered wagon over the Old Santa Fe Trail to the Chapel.

The Chapel was completed in 1878 and has since seen many additions and renovations such as the introduction of the Stations of the Cross, the Gothic altar and the frescos during the 1890s.

The Miraculous Staircase, which legend says was constructed or inspired by St. Joseph the Carpenter, was built sometime between 1877 and 1881. It took at least six months to build, and has two 360 degree turns with no visible means of support.

The Loretto Academy was closed in 1968, and the property was put up for sale. At the time of sale in 1971, Our Lady of Light Chapel was informally deconsecrated as a Catholic Chapel.

Loretto Chapel is now a private museum operated and maintained, in part, for the preservation of the Miraculous Staircase and the Chapel itself.